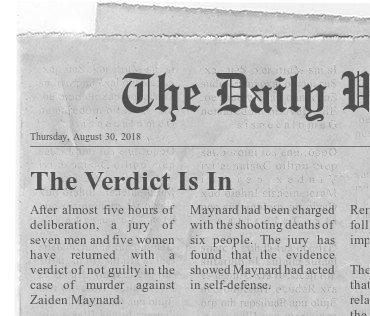 Owen was happy to see his father. He was glad he was home. He had missed him.

The house was full of people. His aunts and uncle were there to see his dad. It was nice to see them.

Grace wasn’t leaving their father’s side. This was the second time they had been separated. She wasn’t letting it happen again.

He walked outside to get away from everybody. It was only a few minutes later that someone sat down beside him.

Owen nodded without looking up from the spot on the ground he had been staring at. “Just needed some fresh air.”

“There is a lot of people in there, isn’t there?”

“It feels like Christmas. Just without the decorations and gifts.”

“You don’t think people should be here or be happy today?”

Owen shrugged his shoulders but didn’t say anything.

“Your mom told me that you have been asking a lot of questions.” Owen looked at his dad. “You were arrested for murder, Dad. I wanted to know what was going on. I didn’t know if I was ever going to see you again without a glass window between us.”

Zaiden could see that his son had a lot of built up emotions ready to come out. He sat quietly and let Owen say what he needed to say.

“I have talked to your mother and your grandfather. He is going to come over tomorrow and we are all going to talk. You and your sister both deserve to know what happened. We will answer all your questions. I promise.”

Owen was glad they were finally going to get answers. He hugged his dad. “I am glad you are home.